LA Art: Picking Up Where We Left Off 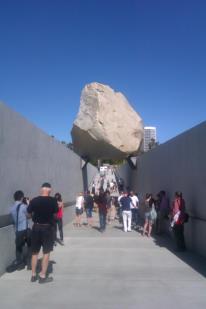 In addition to writing about art, Moira Cue is a painter who will be exhibiting at the SELECT Art Fair in Miami this December.

Last issue I wrote that, "the Terrell Moore Gallery has been drawing crowds more than ever this year.." only to hear of the tragic fire which swept through the artist's live/work space. The Los Angeles Fire Department was on the scene and salvaged, according to Moore, "the majority of my work." He further stated, "I can't express my gratitude enough for the amazing job they did." Moore's work can be found online here at the bohemian GALLERY.

Here's another follow up story. The ROCK. No, not Dwayne Johnson.

Let me refresh your memory:

You have to see it to believe it: A giant rock has Los Angeles star-struck. My partner and I just happened to be out for an evening stroll early in March when we bumped smack into the fanfare and caravan preceding the 340 ton boulder, as it made its slow but serpentine trail through the city to its installation on the West Side, where it will eventually appear to "levitate" above a corridor where people can view the mass from below. As we decided to wait for the rock's arrival, police created a blockade and motorists were turned away, and crowds gathered, including news announcers, much like the spectacle surrounding a visiting dignitary such as President Obama or Prince William and Princess Kate. Passing vehicles who rolled down their windows while careening, and begged us to tell them, "Who is it? What's going on? What happened? What are you waiting for?" "It's for art!" I yelled, instantly promoting Michael Heizer, the artist, far up in my esteem for taking the Pet Rock to its logical apex, rock stardom.

With high expectations such as these, "the Rock" or "LEVITATED MASS," as the sculpture is actually named, has a lot in common with another rock--Bar-"rock" Obama, who was elected by people who expected him to fly. With a cape. Which is sort of what we thought the rock was going to do: float. Or appear to float, right? Eh ... As you can see from the photo, LEVITATED MASS is a really cool sculpture. A big rock you can walk under. But does it float? Not so much. As I told my partner, it reminded me of the time I ordered sea monkeys from the back of a comic book when I was a kid. I was one of the kids who thought they were going to look like mini-people with fishy scales and tails the way the artist in the illustrated made them look. When I realized that the rock did not float, or look like it was floating, it felt similarly disappointing. But maybe I should be more like everyone else who was there that first day to unveil the most biggest inanimate star to ever settle in Los Angeles, amazed by what it was: huge. Tangibly huge. And according to more than one small child, kind of awesome.

And speaking of awesome, if you missed the Sharon Lockhart and Noa Eschkol exhibit which closed on September 9, I encourage you to view the archives to learn more about this intriguing Isreali choreographer (Noa Eschkol) and her the woman who documented and curated her work (Sharon Lockhart) by clicking the link here.

Elevated Mass now resides permanently on the grounds of LACMA, free to view and experience close up.

The Hollywood Sentinel, ©2012, all rights reserved.