In art, what constitutes the most beautiful or significant work is subjective, but what I like is art that is extremely current but connected to a depth of process and in particular the so-called painterly tradition. I like work that reflects a creator who is actively engaged in looking, one who tenders the multiplicity of furtive or angled glances into a dense, singular record of time spent. But this can also be done in photography, evident at the Amstel Gallery. There I discovered, to my sheer delight, the work of Alex and Felix as well as Angiet Snoep. 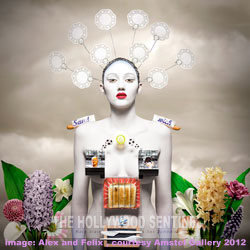 Angiet, raised in Rotterdam, is the daughter of a former director of the Historical Museum of Rotterdam and a descendant of Ambrosius Bosschaert, an extraordinarily skilled 17th century painter whose work can be seen on view at the Getty Center Los Angeles (in addition to other major museums worldwide), and is said to have influenced the entire tradition of Dutch painting. Angiet is the latest artist to pay homage to her famous ancestor in a series of carefully crafted, staged photographs primarily involving a minimalist cast of insects, crustaceans, and flora. They were flying off the walls at under two thousand dollars a print. Alex and Felix create theatrical sets that look like Tim Burton themed fashion shoots crossed with a Talking Heads video and a Catholic idol hanging from the dashboard. That's three parts whimsy, one part pageantry and a dash of kitsch. In other words, "More, please!"

Gabrielle Bakker's contemporary paintings also reference and reinterpret from history, for example, the story of Leda and the Swan from Greek mythology in which Zeus came to Leda in the form of a swan, a popular motif in Renaissance and later art. Ms. Bakker, like her predecessor Lee Bontecou and other female artists, enjoyed early commercial success followed by decades of working on in relative obscurity, only to hit a certain age and be "discovered" all over again, but with the additional clarity and maturity that is the reward of persevering through adversity. Her work utilizes the tools and techniques of the classic Old Masters, but conceptually feels very postmodern in its use of pastiche and a multi-cultural perspective. Ms. Bakker deserves a round of congratulations as a recipient of not only a 2010 American Acadamy of Arts and Letters award, but a 2010-2011 Pollack-Krasner Foundation Grant. She is currently represented by Davidson Galleries out of Seattle. 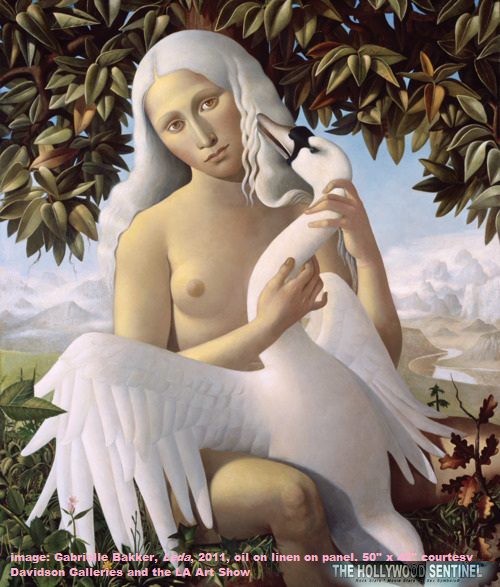 According to the official modern and contemporary fact sheet, "The LA Art Show: Modern & Contemporary is committed to showing the highest quality works ranging from Damien Hirst, David Bailey, Jamie Reid, Ed Ruscha, Armando Romero, David Hockney, Roy Lichtenstein, Arshile Gorky, Jim Dine, Andy Warhol, Fernando Botero, and others." These are many of the top artists in the market today, whose success was predicated on their brilliance and hard work. Sadly, in this so-called 'post-feminist' era, it's typical to see a lack of diversity in such litanies, wherein women are completely absent. (And, in the past, I too have been guilty of such omissions.) It's still the norm to go to a contemporary museum or gallery and see an entire show or wing without any women or nonwhite artists included. Females and nonwhite artists are still being segregated. When they are granted exhibition opportunities it is too often accompanied with a self-congratulatory attitude of "See, we let one in, so we're not bigots." For example, you will see the word "Women" or "Female" to refer to a group of artists in a museum show, such as one I'm looking forward to at the LACMA called "In Wonderland: The Surrealist Adventures of Women Artists in Mexico and the United States." You would never see an exhibit called "The....Adventures of Men," because male artists are considered the norm, and females the notable exception. And the old excuse of women aren't educated doesn't hold water---there are actually more women getting BFA's than men. 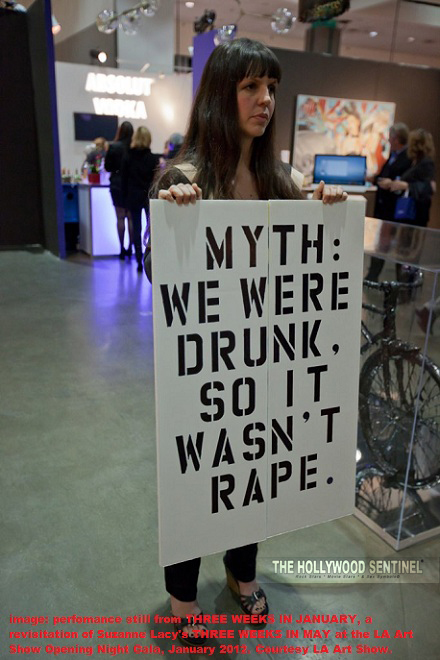 Nonetheless, at the opening night VIP gala, Myths of Rape (2012), a performance by Audrey Chan and Elana Mann, a reinterpretation of Leslie Labowitz-Starus' Myths of Rape (1977), part of Suzanne Lacy's groundbreaking 1977 performance, "Three Weeks in May," presented by Los Angeles Contemporary Exhibitions (LACE) as part of the Getty Pacific Standard Time Performance Festival felt omnipresent, with dozens of volunteers silently carrying placards throughout the exhibit exposing myths about rape, including the myth that only women or gay men are victims. The original Three Weeks project documented rapes in the city of Los Angeles over a three week period of time. Chalk lines were drawn on sidewalks and red ink stamped onto a map to mark the location so that people in the community would be aware and silence would be broken. Many people, including myself, felt uncomfortable being confronted with this taboo subject in an exclusive, celebrity-studded event that not just anyone can get into. But when art makes me uncomfortable, in general, I see it as a good thing.

Suzanne Lacy's work is important historically and socially and especially when you understand the original context. I made the smart choice this year of taking advantage of some of the auxiliary events, including two panel discussions about the Three Weeks project with Suzanne and her associates, and one on the major Pacific Standard Time exhibition funded in part by the Getty. At the "RE- CREATING FEMINISM: Performance and Politics 1977/2012" symposium, artists Audrey Chan, Leslie Labowitz-Starus, Mecca Vazie, Nancy Buchanan, and Alexandra Grant talked about revisiting or re-creating performance with an emphasis on the Lacy project. Leslie and audience members explained that prior to Three Weeks, there were few resources available to women survivors of sexual assault. There were no crisis hotlines or free counseling groups at women's centers. Often, unless someone important was murdered, rape wasn't reported in the newspapers or investigated with the vigor it is, hopefully, in most instances today. Alexandra Grant discussed her re-working of Faith Wilding's Womb Room. In the middle of the discussion, I was moved to tears by the care and compassion these women brought in such abundance toward their subject. One of the lighter moments occurred when the pioneering Nancy Buchanan, in the radical spirit, rejected being labeled "art star" and called the celebritization of artists a 'problem.' But, I would add, a problem most artists would envy.

Of all the panels I missed, I most regret not seeing "ARTILLERY | LA ART SHOW PANEL: A MATTER OF DEGREES: MFA, PhD in Art : Is it all BS?" This panel discussion moderated by Tulsa Kinney, editor of Artillery: Killer Text on Art addresses the fact that "art schools have become big business, churning out career artists ready for the explosive art market. But the graduates walk away with colossal student loans, often in the six-digit figures." They ask, "Is it worth it? Is it necessary? Does it guarantee success in the art world?" Although I wasn't there, I know that for too many students at too many schools the answer is "no." Eighty percent of people who get their BFA's have no formal involvement with the art world after graduation. I wonder what percentage of those people feel left out, as if the art world is for a small group of affluent elites only.

Which is why events such as the Pacific Standard Time exhibition are so refreshing. They offer the opportunity for community involvement and participation with segments such as the public art festival, which included many free public events. During "Pacific Standard Time: Successes and Opportunities" moderated by George Melrod, Editor, art ltd. Magazine, Peter Frank, the preeminent LA critic and curator, Hunter Drohojowska-Philp, author of Rebels In Paradise and PST commentator on NPR, Leah Lehmbeck, Associate Curator, Norton Simon Museum, and Frank Lloyd, owner of Frank Lloyd Gallery talked about the competition between New York and Los Angeles and the emergence of the latter as a significant force in the international scene. I was impressed by their combined encyclopedic knowledge of exhibits and relationships--these panelists were rattling off dates of shows and names of curators and galleries going back to the 1930s, as if they had just happened last week. They characterized the stereotype of Los Angeles artists as "entertaining" and "fun" which was intended as a write-off. But, Peter Frank said, LA artists responded to the allegation with, "So? And the problem is?"

Due to time constraints, we regret that only a fraction of the exciting and outstanding art we saw is covered here.The Hollywood Sentinel's Los Angeles Art Show coverage will continue in our next issue and with selected artists and galleries highlighted throughout the year.