Backstage at The Oscars®: King’s Speech Wins the Crown 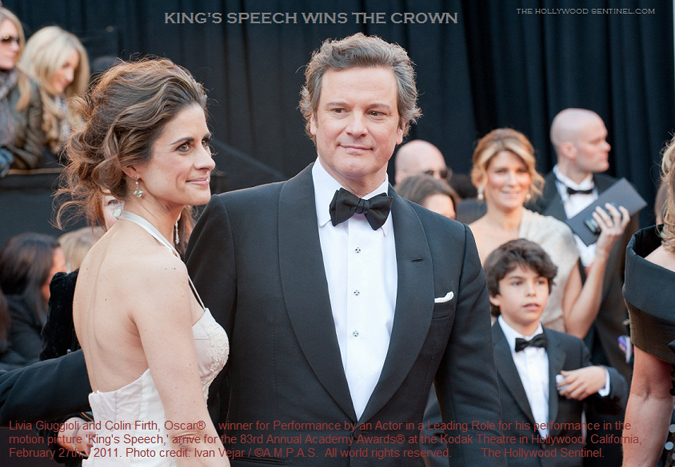 The Hollywood Sentinel brings you here backstage at The Oscars in Hollywood, California, for the 83rd Annual Academy Award Winners for an interview with the winners of Best Picture, Best Director, Best Actor, and Best Original Screenplay, for the landmark film King’s Speech, a beautiful film about destroying fear, and achieving the impossible at any costs.

Q. Gareth, do you have anything to say about Harvey and his support of the film and the way he manages it?

A. Gareth Unwin: Yeah. I mean, there's no doubt we wouldn't have been here without Harvey Weinstein. He did an absolutely amazing release of his film. The timing of the release was perfect, working with the campaign, and we owe him a huge amount. The film has worked incredibly well in America. It's worked all around the world, but this awards season has been driven hugely by Harvey.

Best Actor - Performance by an actor in a leading role: Colin Firth


Q. Why do you not support the new PG-13 version of the film?

A. Colin Firth: Because I think the film has its integrity as it stands. I think that scene belongs where it is. I think it serves a purpose. I'm not someone who is casual about that kind of language. I don't relish I take my children to see football games, soccer. And I wouldn't be able to, if I wanted to protect them from those kind of words at the expense of all else. I hate hearing that language around them, but I'm not going to deny them an experience of a live game. You know, it does distress me to, you know, to hear that language bawled in the ears of my kids. So I don't take that stuff lightly. But the context of this film could not be more edifying, more appropriate. It's not vicious. It's not to do insult or it's not in any of the context which might offend people, really. It's about a man trying to free himself through the use of forbidden words, and he's so coy about it. I mean, I just can't I still haven't met the person who would object to it. So I think the film should stand as it is.

Q. Obviously you had a huge historical responsibility with this film. What was your greatest challenge?

A. Tom Hooper: I think probably the greatest challenge was the risk with this film is it could have been quite slight. It's a film about a man who makes a bad speech, and at the end, he makes quite a good speech, a brilliant speech. And I have thought a key thing was to get inside the mind of someone who stammers, because if you are a severe stammerer, even ordering lunch in at a restaurant can be hugely traumatic.

Q. Congratulations. A couple people have already asked you questions about your mom. But I am wondering when your mom first came to you with the idea for the movie, did you love it right away? Were you a little skeptical?

A. I am very embarrassed to admit that I did not read it. So, you know, I think I was directing "John Adams", so I was in LA, and I was legitimately busy, post producing nine hours of 'John Adams.' I was trying to get it out for March. And so, not only did she find it, she also reminded me every two weeks for about three or four months that I really should read it, and thank God, I did because when I read it I rang her up and said sorry it's taken me so long; yes, it is my next movie.

Q. You said you felt this movie has now given stammerers a voice around the world. Talk to me a little bit more about that. Why do you think that is?

A. David Seidler: Well, I don't want to give away privileged information, but you know, a fairly high ranking person called me the other day and wanted to talk ex-stutterer to ex-stutterer and expressed their guilt at the fact that for so many years they stayed in the closet because they felt it would hurt their career to be known as an ex-stutterer because people still have the archaic notion that we stutterers are feeble minded simply because it is difficult to articulate our thoughts. And the fact that this film has come out has given so many people the courage to talk about their stuttering, and I've been flooded with the most wonderful e-mails, phone calls, text messages from my fellow stutterers because I'm still a stutterer, all right. I know all the tricks; you don't hear it. I don't even have to think about it anymore, but I am still a stutterer. But to have these people tell me their personal stories, really moves me to tears.

I'll give you one example. A speech therapist spoke to me just a few days ago, that one of her clients, a teenage girl, had come in and having been terribly bullied for being a stutterer, and what do most of these stutterers do when we're bullied, we keep quiet because how can we talk back? That's the very thing they tease us about. But this girl was determined not to take it. And the therapist said, "What made the difference? Normally, you just remain passive." And she said, "Because (now) I have a voice!”