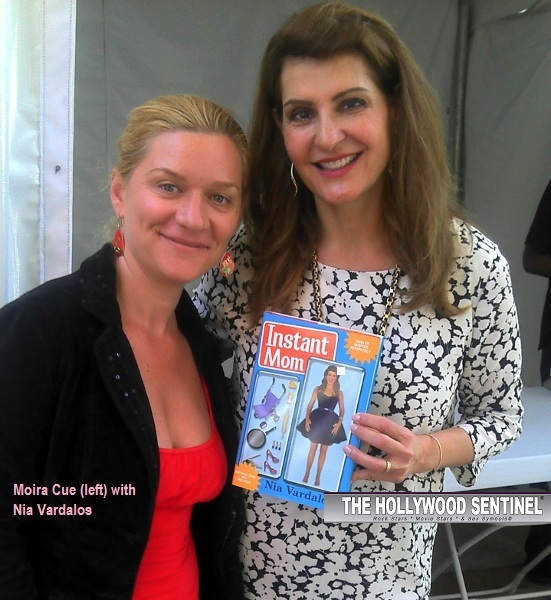 My first day on set as an extra many years ago, I was lucky enough to be directed by Wil Smith. Sure, the llama got more attention than I did, but that's show business. Flash forward eight years, and I've met a lot of stars, enough that I don't regularly get starstruck or have to wait in line like a groupie. I can usually have “my people” contact anybody.

There's one person I was so super excited to meet that I waited in the hot sun for an hour sitting in the front row of outdoor seating at last summer's LA Times' sponsored “Festival of Books.” Her name is Nia Vardalos, and she is author of Instant Mom, a memoir about her journey of adopting a young girl after she found out she could not have biological children. You may know Nia from MY BIG FAT GREEK WEDDING and all things big, fat, and Greek.

I purchased a copy of Instant Mom only because Nia inscribed it with my name and the inscription “To Moira Cue! Best of luck! - Nia Vardalos,” just like I asked. I admit, I waited again, in a long line, with everybody else. Like an ordinary person instead of the star reporter that I am. ;)

Nia's book barely touches on her phenomenal success. For anyone who needs reminding, Nia gained overnight fame with (according to Wikipedia) “her movie about a woman's struggle to find love in My Big Fat Greek Wedding, which was based on a one-woman show Vardalos had previously written and starred in ... The film earned Vardalos an Academy Award Nomination for Best Writing, a Golden Globe Nomination for Best Actress in a Motion Picture Musical or Comedy and a Screen Actors Guild Award Nomination.” Her runaway hit quickly became one of the highest-grossing independent films of all time.

Instead, Nia talks about her marriage to Ian Gomez and how she “instantly” became a mom by adopting a child out of foster care and into a permanent, stable, loving environment. This little girl's name is Ilaria, which is “an Italian feminine version of the name Hilarius,” and means “funny gift from God.” (Obviously, the perfect choice for a child with two funny parents!)

Even though I only bought the book because I am a fan of Nia's work, and believe that she inspires all women in Hollywood to think more of ourselves, I found myself sucked in to Nia's family. Reading Nia's book feels a little like sitting around her kitchen table, one imagines. She uses language that makes the story accessible to almost all reading levels, but never lost my interest as a result. She is on paper, as she was in person, living, breathing proof that you can succeed in Hollywood without losing your small town charm or general niceness. I highly recommend Instant Mom to all general audiences age twelve and up.

This story is ©2014, The Hollywood Sentinel, all world rights reserved.